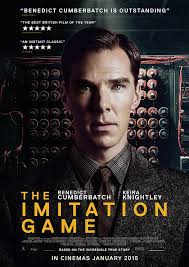 Being familiar with his story, Alan Turing’s achievement didn’t come as a surprise to me. One of the film’s merits is that it succeeds in getting across the enormity of the sacrifices needed to win a war – including keeping secret that Turing breaking the Enigma code hastened the allied victory. And one that was unnecessarily kept secret for many more years; Turing didn’t get the credits for “shortening the war by two years and saving 14 million lives” until 2010. Adding shame to insult, his post-war years were made miserable by a supposedly enlightened England that treated homosexuality as a crime. It brings tears to one’s eyes to learn that the only feasible solution mastermind Turing saw to this injustice was committing suicide at the age of 41.