Heretic. Why Islam must change to join the modern world – Ayaan Hirsi Ali (2015) 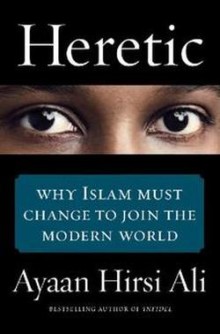 Right in the beginning of her book Hirsi Ali admits thats she was wrong to state, as she did in her last book, that Islam can’t be reformed. The Arab Spring is the reason of her striking U-turn and has fueled Ayaan’s hope that reform is possible.
The central thesis of ‘Heretic’ is that the fundamental problem standing in the way of real reform is the notion that the majority of peaceful and decent Muslims are not willing to acknowledge that the theological ground for intolerance and violence is to be found in their own religious texts. Let alone, criticizing them.

Ayaan Hirsi Ali wants to confront Islam with the actions of its most violent followers and states that the central beliefs (with which this violence is justified) should be reformed or forsworn. She distinguishes three types of Muslims: Medina Muslims, Mekka Muslims and reformers. The first group are the violent jihadists, with IS, Al-Qaeda, Boko Haram as their most notorious representatives, and make up a small percentage of the Muslims.  Which, by the way, on 1,6 billion believers remains a sizable group. The Mekka Muslims, the majority of the Muslim world, are faithful to the central beliefs and are devout Muslims, but will not resort to violence. Although they are peaceful, their beliefs – unchanged since the 7th century – are often at odds with modern society. The third group, the reformers, are to be found within and outside of the Islam and are the people the West should have the boldness to support. Ayaan is of the view that the Medina Muslims are currently winning over the hearts and minds of large numbers of the passive Mekka Muslims. The five central prescriptions that have made Islam immune to change over the last centuries that need reform – or abolition – according to Hirsi Ali are:
1- The semi-god status and infallibility of Muhammad and the literary reading of the Quran; interpretation and criticism should be allowed.
2- The investment in life after death instead of life before death. Priority should be given to life on earth.
3- The sharia, the Hadith and other Islamic doctrine. they should be made inferior to secular law.
4- The habit to give individuals the right to enforce Islamic law, dictating what is ‘good’ and forbidding what is ‘bad’ should be terminated.
5- The command to fight the holy war, the jihad should be let go.

Those are ambitious goals, especially taking into account that islam is not only a religion as it also prescribes how to live and behave; politically, economically and religiously. It is everywhere. Critical thinking needs the liberation of the individual conscience from clerical power. As we know, Christianity has gone through this process of reformation a while ago.  In an attempt to explain in a simple way the difference between the three monotheistic religions Ayaan puts it as follows: Christians worship a man who has been deified, Jews worship a book, Muslims do both.
One of the most interesting paradoxes of Islam is that it’s one of the most decentralized religion on the globe but at the same time the most rigid one. Over the centuries fitna (internal struggle) has always been seen as fundamentally destructive (the first big disagreement almost destroyed the religion) and something that should be avoided at all costs. This explains partly the cruelness of some of the punishments, while it at the same time, and more importantly, suppresses reform, individualism and critical thinking.

Ayaan quotes a director of  an anti-terrorism think tank, saying that the jihad appeals to great scores of young people because it gives a clear answer to complex issues. Introspection is not needed as all blame can be given to conspiracies against Islam and external enemies. It gives sense and direction and a new identity. The West hasn’t  succeeded in countering this, in the view of many very exciting, narrative.
Ayaan ads that a narrative is not enough, we should counter it with a theological answer. Hirsi Ali draws a comparison with communism and its collapse, when the battle for ideology was won by the West. We are dealing with a political religion. The role of the West should not be fighting billion dollar wars, but to spend that energy and money on protecting dissidents and facilitation of platforms to give some counterweight to the enormous network of Islamic centers, madrassahs and mosques that are to a large extent responsible for the spreading of the most dangerous forms of Islamic fundamentalism. We keep focusing on the violence, while we should concentrate on the ideas that are at their source. And according to Ayaan we can learn from how we dealt with the Cold War – eventually winning that war with better and more positive ideas and an appealing vision.

Ayaan sees three factors that make her optimistic: the spread of online communication, the inability of Islamist to decently run a country once in power combined with the influence of western values on Muslim immigrants and the rise of political support for religious reform in important Middle-Eastern sates. Later on she cites a fourth reason for her optimism: she hopes the West will finally see the light. And will be willing to fight this war of ideas.

The book is an impassioned argument for Islamic reform. Reading the last pages with CNN in the background reporting the simultaneous jihadist terrorist attacks on three continents – beheading an innocent man near Lyon, killing dozens of tourists in a beach hotel in Tunisia and shooting Shi’ites in Kuwait while praying during the month of Ramadan – is once again  proof that Ayaan Hirsi Ali’s analysis is to be taken very seriously.