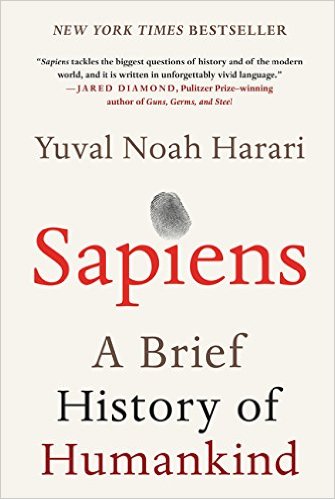 Rulers of the world

The United Nations don’t exist. The only place the nations of the world come together is in our minds. Think about it: destroying their headquarters in New York wouldn’t make us stop believing in the existence of the UN. Nor would the sudden disappearance of all its employees make the UN physically vanish. Nor would burning its charter. The organization is a myth; our own creation.
Everything is a fantasy – incredibly difficult for the human brain to fathom. What goes for the UN, goes for money, corporations, human rights, nation-states, consumers: they are intersubjective realities. They only exist in our collective imagination. Nevertheless, their power is immense.

One of the main notions of the book is that language has empowered the human race, sapiens, to create myths. This was a huge, if not the biggest, breakthrough in the story of mankind. It gave us the power to unify, to direct masses and to organize on a global scale. Those who understand how to make people believe their story, their myth, hold the power to change. Homo sapiens has the special ability to unite millions of strangers around commons myths.

But this abality also made us the deadliest species in the history of the world.

He is especially pessimistic about the second one, calling the agricultural revolution the ‘biggest fraud in history’. The reason; sapiens swapped a healthy and abundant diet for wheat, which changed virtually everything. This revolution is normally viewed very positively, giving men room for development at last, but Harari sees it as a downright disaster: the possibility of keeping more people alive under difficult circumstances only created more problems. It caused, among others, long hours of work, greater risk of starvation and uglier forms of hierarchy. The bitter harvest was a spoiled elite (letting other people do the work), bad health and an explosion of the population, As Harari puts it: “we did not domesticate wheat. It domesticated us.”

Subsequently, we increased our power over the globe with astonishing speed. Helped by the three so-called harmonizers – money, empires and religion – sapiens successfully built a global, unified, world. The combination of imperialism and science further tightened our grip on the world: from Darwin to Cook, from Armstrong to Vasco de Gama, they all used scientific methods to conquer the world.
This all plays into our feeling of guilt: of our wealth, of the cruel treatment we subjugate other organisms (as cows and monkeys) to, of our lack of historical perspective and above all of the massive killing we’ve perpetrated since the early days of our existence as sapiens.

Harari doesn’t shy away from hyperboles (sometimes bordering sensationalism) and, as far as I can judge, not all his claims are backed by solid scientific evidence. But, he writes with great spezzatura and the way he connects the dots, linking the different revolutions, is admirable. He is a fine storyteller, with great mastery of detail and fascinating examples (like the importance of sauerkraut in sea exploration). Moreover, his ability to connect with today is gorgeous. In explaining how stress was introduced in sapiens’ daily life after he started cultivating wheat Harari draws a parallel with our modern life of luxury and iphones. We are still stressed – where is the progress?

One of the most intriguing things is that I really began to see the Roman era as part of recent history. Since the book starts with the very first species, two millennia suddenly feels like yesterday. The pages on modern history culminate in an intriguing statement. As we all know the industrial revolution triggered other high-impact revolutions (as urbanization, youth culture, democratization, the decline of patriarchalism), but Harari is of the opinion that the biggest revolution ever (sic!) is the destruction of family ties and the context of local communities and their replacement by state and market. As those community ties withered over the last two centuries, the vacuum they left behind was filled by imaginary communities, as Islam, consumentism and the nation state. Although interesting, this seems too quick of a conclusion. What about the liberation of the individual? Or women’s freedom to choose their own partners? How does he asses the possibility we all now have to leave our small community and explore the world? How credible is putting islam and a taste for shopping in one basket?

Harari states that historians are great at investigating history and telling stories but they never touch upon the most important question of all: when is sapiens happy?
In his view, we have shown little progress: We’re still stressed, we’ve have killed and destroyed more than necessary and are still not capable of leading a valuable life. There’s little to be proud of. It’s this last topic he ends the book with: what makes a good life and will we be able, now that technology is omni-present, to design it? We have always been great at innovating our way out of problems (always finding or inventing new energy sources for example), but what’s the next level?

The only thing that makes people happy are physical sensations. Serotonine. Whether one pays off the mortgage for a ten million dollar penthouse or drives the last nail in a mediaval shed, the level of serotonine will go up. It will make the millionaire as happy as the mediaval peasant. Again, its all relative.

So, our last revolution will be manipulation biochemistry, the key to our happiness. As can be expected from Harari: this is potentially the biggest revolution of all. It will fundamentally change the human consciousness and identity. He sees three ways intelligent design can replace natural selection: biological modification, construction of cyborgs (above all the linking the brain to computes ) and construction of an-organic life (e.g. computer viruses that can evolve independently).

Sapiens came a long way: from inisgnificant species to absolute rulers of the world. And now we’re on the verge of becoming god. The question that needs answering might very well not be “what do we want to become?’, but “what do we want to long for?”

The really valuable thing this book does is to broaden the reader’s perspective. We are forced to switch gear, to refocus. From the West to China, from present day to the Middle-Ages and from man to animal. Through this wide angle lens everything becomes relative. What the books leaves relatively untouched is why millions of people, all over the world, don’t see their culture, their history, their legacy as relative. Is this really only because we need myths? For the French 14th July 1789 is more that a random date, it’s the beginning of their nation. Indians are still seen as the real native Americans, while we know other sapiens have preceeded them. I think we need some grip, some firm ground, to be able to survive. Not everything can for grabs, no-one can live in a vacuum. Maybe sapiens is able to adopt such a broad perspective after, let’s say, a thousand years?
Furthermore, his argument that everything is imaginary isn’t convincing in every way. It’s just silly to say that liberal humanism, “is a religion” or “all humanists worship humanity”; “

Although Harari disregards all the beauty men have created and contributed to the world (think music, literature, film, health; he probably sees them as ‘imaginary) this is an intense and stimulating book. It will for sure spark great conversations among modern-day sapiens.

Sapiens; A Brief History of Humankind by Yuval Noah Harari, 2012